It's a Learning Experience

I got ahead of myself switching the girls feed over the weekend.  I thought the girls were suppose to go from baby chick food to layer rations and that grower/finisher feed was for meat birds.  But after a fellow backyard chicken friend mentioned hers were on grower/finisher feed, I did some research and indeed, this is what they need to be eating.

Layer rations is so high in calcium that they really shouldn't be on this feed until they are actually processing that calcium into egg shells.  And thankfully, the feed store was open on Monday so I buzzed down there and picked up a bag.  I felt like such a bad chicken mama letting them eat the layer rations for the day.  But one day shouldn't hurt them at all.

I've also been on the look out for some sort of seat to put in the girls run so I have something to sit on when I go out to feed and visit them.  But I've struggled because anything I put out there, they will poop all over making it, well, not something I'll want to sit on.  Out on a walk yesterday with my husband we saw this woman working in her garden and using a kneeler and my husband says to me, that's it!  That's what you need for the girls run. 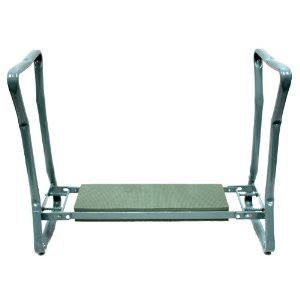 It's both a bench and a kneeler.  I can leave it in the kneeler position (pictured above) out in their run and if they want to sit on it and poop on it, it's fine.  Because when I go out to visit, I'll flip it over to the bench position and this way, it will always be clean and ready for me.  YEA! 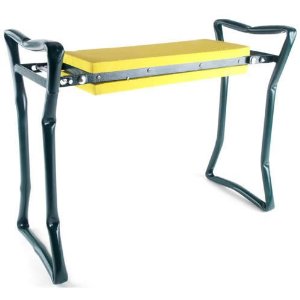