The price of eggs just went up again

If you've followed my blog since the beginning, you'll remember that I had a rough first year.  I read about all the things chickens can get and thought, I had chickens growing up and never once had to deal with ANY of those things.

But, my first year with chickens, I had to deal with nearly all of them.  I had bullies.  A hen turned out to be a rooster.  There was sour crop and a strange respiratory condition that took down two hens.  There was broodiness that was contagious.  Bumble foot, scaly leg mites and that day I came home to find Lulu missing her entire toe nail.  And let's not forget the fatty liver disease, just to name a few.

And as awful as those all were, I was very thankful that I hadn't had to deal with an impacted crop or egg binding.  Well, add impacted crop to my list above.

Honey is going through her first molt and she was clearly not happy about it.  Molting can be really uncomfortable.  So I was trying to give her some special attention and hand feed her some extra protein each day.  When she stopped eating, I knew I had a problem.  The silly girl was eating leaves instead of her feed.

I took her to the vet who tried first to flush out her crop.  But it didn't clear out the blockage.  So today, Honey had surgery to remove the blockage in her crop.  So Honey is going to be a house chicken for a few days until she's feeling back to her old self.  And so I can CLOSELY monitor what she puts in that beak of hers.

What's really troubling is the vet says that she frequently sees these cases as the first sign of Marek's Disease.  Honey was vaccinated.  But I've read that sometimes it doesn't take.

But let's not get ahead of ourselves just yet.  I REALLY want her to raise another batch of babies for me this spring.  Honey was the BEST mama hen last year raising those three Andalusians for me.

Please say a prayer for her that she makes a speedy recovery and that she does NOT have Marek's.

Anyway, as much as I aspire to be cleaver and crafty, I'm simply not.  I have many half finished projects in the garage that I set aside when get frustrated.  But this one just didn't seem like it could be that difficult to make. Then my friend who blogs for Tilly's Nest made one that was even more fabulous.

She wrote a blog that gives step by step directions on how to make one and I couldn't improve on that so I'm going to just post the link for those who want to give it a try. 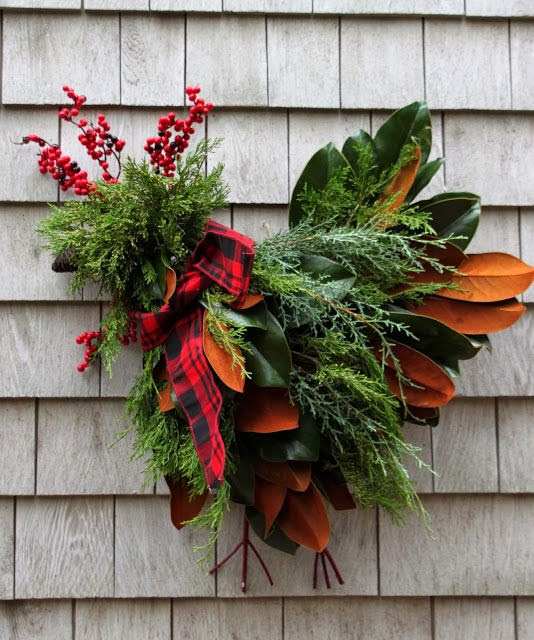 I love how it doesn't matter what you use to make it.  Just go collect interesting leaves and greens from the garden.  My yard is a bit sparse this year as we re-landscaped earlier this year and plants are still quite small or very much hen pecked.

But I had a little free time this afternoon and the weather had warmed just enough that made me want to be outside so I thought I'd take a stab at my own version. 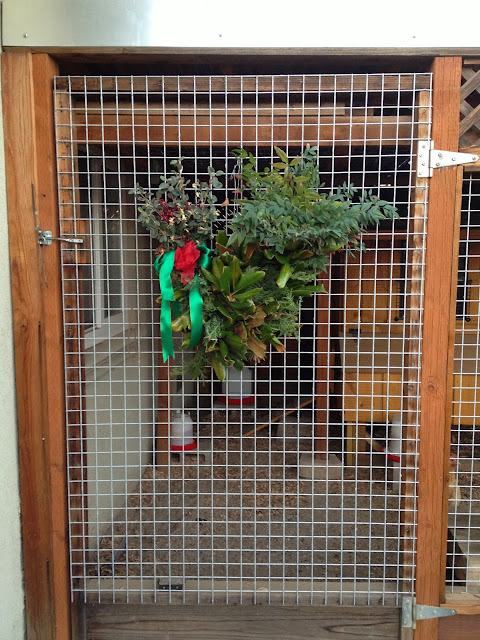 I don't think I quite nailed it but I don't consider it a flop either.  She really does have a beak but the ribbon is covering it up.  And she does have feet too but when I picked up the wreath, the leaves settled and covered up her feet. 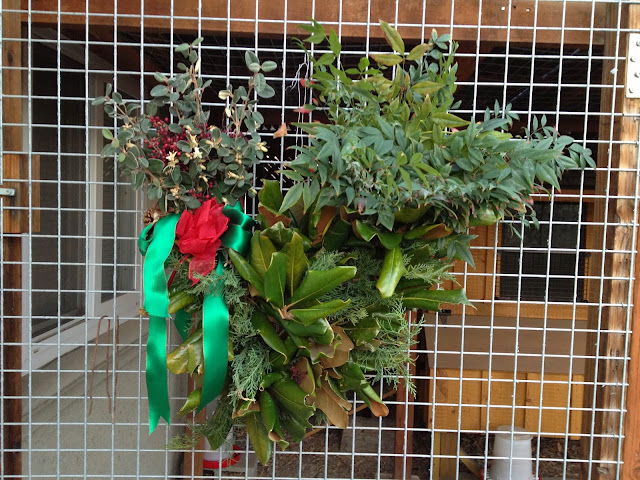 The fresh greens look nice on the gate into the hen's run and it makes me smile each time I go out to see them.

I'll definitely keep wreath making in mind as I cut and dry things over the summer months so that I have a few more items on hand come December next year.
Posted by Flock Mistress at 12/12/2013 1 comment:

It was bitterly cold here this week.  But cold is relative.  While it's been in the 20's when I get up, at least my girls don't have to content with snow or ice.  And the sun does provide some warmth once it comes up.

The girls are much more subdued when it gets this cold.  They are also still molting which is very tiring.    Coco and Poppy are just finishing up molting and Honey is just beginning.

I do try and let them out of their run into the big garden once a day.  And they come up to me to see if I've brought them a treat.  Once that's gone, they just go stand under a bush where they feel safe.

Below are some photos of the girls from last weekend.  The orange treat is an overripe persimmon. 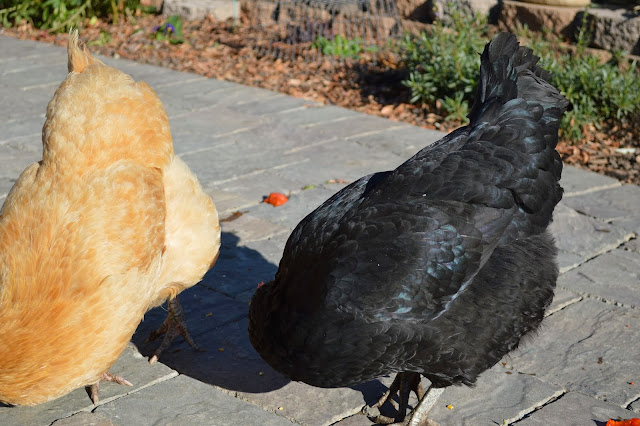 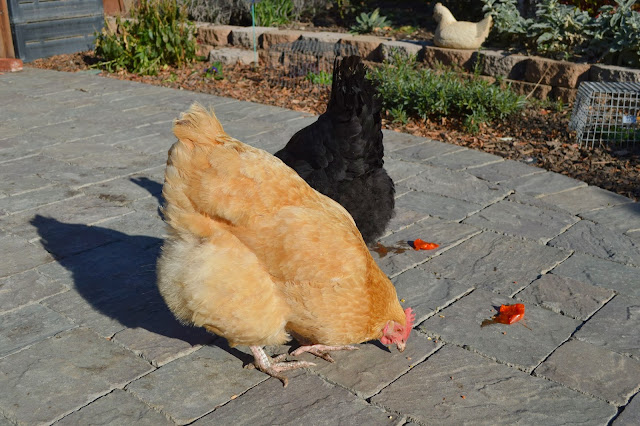 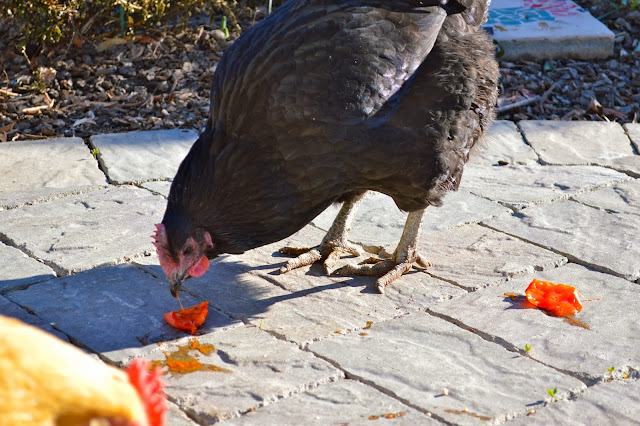 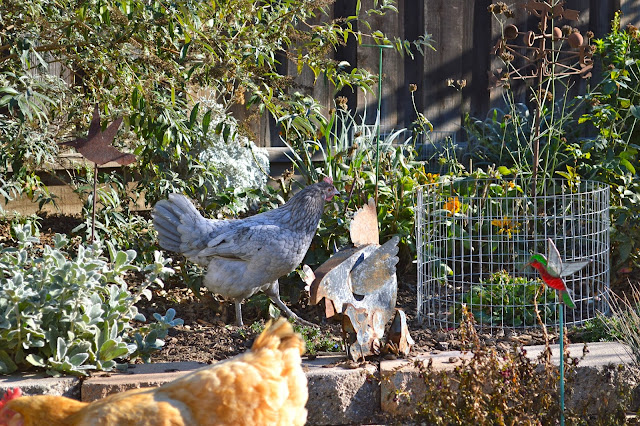 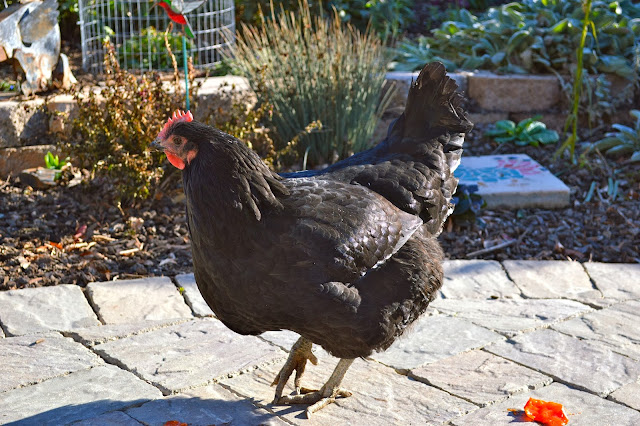 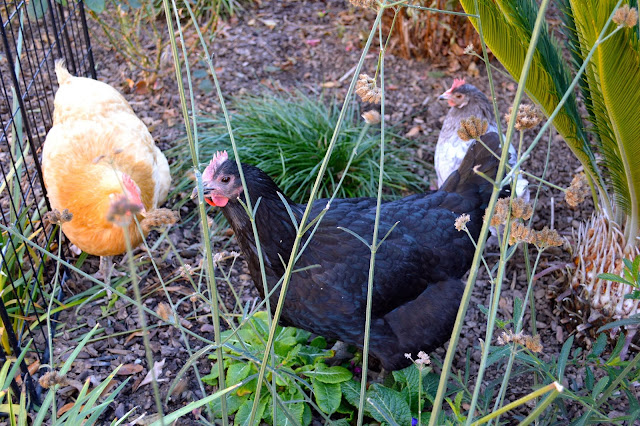 I didn't plan on getting eggs from the girls until March when the days are noticeably warmer and longer.  But Coco squatted for me yesterday.  Something she hasn't done since she started molting back in September.  So I might be back in the egg business sooner than anticipated.
Posted by Flock Mistress at 12/10/2013 2 comments:

Some birds are just destined to be VERY special and Ginger was one of those.  She was on of my original four that I brought home just over three years ago.  And she will always be one of my most special hens.

I learned a TON from Ginger.  More than any book will ever teach me.  For the most part, she was an adorable chicken.  But she did have her moments where she tested my patients.  One of her nicknames was Sunday Dinner.  But I would NEVER!

Below are just a few of my favorite photos of her.  Rest in peace my sweet Ginger.  We miss you terribly.