Coco started her molt about 10 days ago and look at her progress:

Molting is the process that chickens go through each year where they replace their old, worn feathers and replace them with new ones.  Their feathers are more than just pretty, soft things that give them color.  They keep them warm.  If you've ever held a chicken and wriggled your fingers up under their down coats, you'll feel how very warm they are up under there.

Kind of like the warmth you feel when you wear a down jacket or vest or even sleep under a down comforter.  Mmmmm, so toasty warm.

Anyway, some chickens will molt slowly over months.  Others will just seem to drop every feather at once, something we call the "ugly molt".  I'm not sure which is better.  Faster molters will get back to laying eggs sooner than slow molters.  But they also look worse while they molt, thus the term, ugly molt.

Either way, Ginger is just finishing her molt and Coco has just started.  And Coco is molting fast.  I've been picking up all the feathers in their run each day.  But I just can't keep up with her dropping them.  It's so difficult for me to watch.

Solving issues one at a time...

I took the peeper off Coco Saturday.  I just couldn't take it.  Her whole personality had changed.  She was so sad and forlorn.  Yes, it prevented her from pecking at Ginger.  But that was really driven over the fact that I was over treating them.  Cease with the treats, and that problem goes away.

Well, Coco also likes to peck Ginger off the roosting bar.  And the peeper didn't really help with that.  Because Coco knew that Ginger was right there just a few feet away.  So she'd lumbar down the roosting bar like a gymnast down the balancing beam right for Ginger and drive her off.

So I wondered, if I divided the roosting bar in half with something so they couldn't see each other, would that work.  And I think it just might.  I didn't get home in time to watch them go to bed tonight.  But they are exactly as this photo shows them from last night.  Coco on her side and Ginger on the other with the cardboard divider in the middle.


The chick continue to grow every day.  But it will still be months before they are big enough to roost with Coco and Ginger.  So enjoy your separate rooms while you have them girls.  Cuz the youngsters are growing up big and strong and they're gonna wanna roost with you before you know it.
Posted by Flock Mistress at 12/12/2011 No comments:

Well, I have good news and bad news.

Let's get the bad news over with.  I lost one of the chicks.  I'm not really sure what happened.  But looking back at photos of them when I first brought them home, one was holding her wings out and low.  And the others are so healthy, happy and strong, that I really don't believe it was anything I did wrong.  I just think she wasn't meant to be with us more than those few, precious days.

So the three now officially have names, Honey, Sugar and Spice.  And my, they are growing up quickly.  They are ready for some dowels to perch on and things to jump off of in that ever shrinking brooder of theirs.


The peeper has worked in that Coco is no longer pecking at Ginger.  But it also has stressed her and she's beginning to molt.  It is possible that she was destined to molt and the peeper had nothing to do with it.  But I have my suspicions.  So I removed the peeper today.

Her personality has definitely changed.  She no longer goes after Ginger.  But Ginger did insist on drinking water from the exact spot that Coco was drinking.  Coco gave her two fair warning Bok Bok's but when Ginger came back the third time, she got pecked.  But she didn't go cower in the corner.  She just moved over.  It's like she knew she was asking for that.  So maybe those 9 days with the peeper worked.  Only time will tell.

I also had a long chat with a fellow back yard chicken raiser, who pointed out that the big handful of seeds I'm tossing out to them daily is much to much.  It's so important that the majority of their diet comes from their feed which is balanced nutrition for their high protein, high calcium dietary needs.

If you follow my blog, you'll know I've blogged before about over treating.  It's so easy to do.  They are just so cute and curious and LOVE, LOVE, LOVE it when you come bearing things to eat.  And it was always around treats that caused the pecking and fighting.  So really, this may just be a blessing all the way around.

And honestly, those huge bags of black oiled sunflower seeds are quite pricey.  So I'll be very happy not to have to lug home those expensive extras.  The two hens may be mad at me for a bit.  But hopefully, they will get over it.  And maybe they'll decided that a nice hug and some love from their Flock Mistress is just as nice as a handful of seeds.
Posted by Flock Mistress at 12/10/2011 No comments: 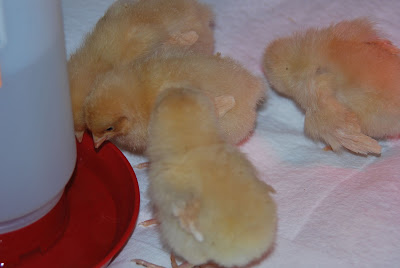 They are bundles of cuteness.  And very happy.  I don't think my last batch of chicks were this content.

Their Flock Mistress, however,  is a nervous wreck.

It's dipping into the 30's here.  I'll pause for the laughter I'm getting from everyone who reads my blog except for my friend, T, who lives in Hawaii.

They seem to be fine under their heat lamp.  And I don't seem to have any trouble keeping one corner of their brooder at 95 degrees.  But I think I've driven my husband absolutely nuts with all of my worries.  What if the power goes out?  What if the heat lamp bulb blows in the middle of the night?  What if, what if, what if?  I can see why people love, love, love their broody hens who raise their babies for them.

Well, the Pinless Peeper works!  It's been 48 hours with it on and Coco is a much more mellow chicken.  And Ginger is becoming more confident.  The two of them can eat out of the same treat bowl with no drama.  Although, when Coco looks up at Ginger, Ginger is clearly still scared and moves away quickly.

But the improvement has been so quick, that I'm really hopeful we can break Coco of this naughty pecking habit.

The one area that persists in being an issue is the roosting bar.  Coco hops up and just lumbers at Ginger like a gymnast down the balancing beam.  She KNOWS Ginger is at the opposite end.  The fearful squawks Ginger lets out just before hopping down, break my heart.  But Coco usually does this twice and then it quickly gets too dark for her to see and Ginger hops up, moves as far away from Coco as she can, and settles down.

My roosting bar is one four foot long bar.  I've been tempted to add two smaller pieces on either side to make it into the shape of a cross.  This way, I could easily house 5 full sized birds w/ out issue.  The house might be a tad small, but living where the weather is mild, my girls don't spend anytime in their house unless they are sleeping or laying.  So it could work.

The real problem is my lack of handyman skills.  But I suppose I should just go buy a small saw and a two by four and see what I can rig.  I could probably even just put them up and let tension hold them in place and watch them to see if it's a good idea or not.

The other thing I think will help is adding chickens to the flock so that Coco can't direct ALL of her aggressive tendencies towards one bird.  And I was afraid I was going to have to wait till February to pick up more chicks.  But I called the local feed store today and when she said they just received a box of Buff Orpingtons in, well, I quickly set up the brooder and headed over the hill.

So in my garage right now are four baby Buff Orpingtons.  OMG, can we say cuteness?  I only plan on keeping two.  But I wanted to be sure I GOT two girls out of the deal.  And already, I have my suspicions.  Stick your hand in there to adjust the feeder or temperature and one will come right up and peck at my hand.  Hmmm, not a good sign.  More to come on the babies.  Check back soon.
Posted by Flock Mistress at 12/03/2011 2 comments:

So I quarantined Coco yesterday from Ginger because she was bullying Ginger.  I'm not sure who suffered more, Coco, Ginger or me.  Coco gave me a tong lashing that was pretty brutal.  Ginger just stood there like, I don't want to be alone and I don't understand why I'm all alone.  And me, I was a nervous mother hen wreck.

I took Coco to the vet this afternoon because I didn't have the stomach to put a pinless peeper on her myself.  Turns out, the vet had never done it before either.  ACK.  It took him four tries before it didn't just come flying off.  And at that point, she had had enough.  He set her down and she closed her eyes, went limp and just rolled to one side.  I thought she was dead.  I was horrified.

I scooped her up in my arms and she clearly wasn't dead.  But she wasn't happy either.  I had all I could do not to just take the peeper off of her.  But I resisted.  I brought her home and put her out back w/ Ginger and she really came around.  The two ran around and scratched and pecked together.  But not at each other.

I even dumped a pile of meal worms on the patio for them to share and there was no fighting.  Clearly, the peepers slow Coco down and affect her ability to see what's right in front of her.  But I watched her closely and she can eat and drink and get up onto the roosting bar just fine.

So I'm going to leave it on for a period of time to get her to calm down and leave Ginger alone.  I'm not sure how long that will be.  Only time will tell. 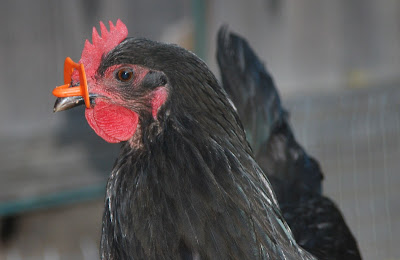 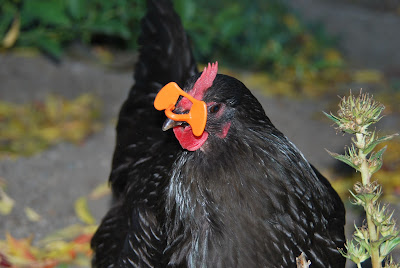 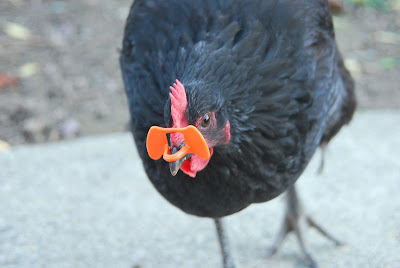