Or does Ginger look like she was the model for those hen purses they sell all over the internet?

My babies are babies no more.  They are wild teenagers.

They had been refusing to sleep in their coop.  Instead, they have decided that roosting in the Camellia tree in their run is more desirable.  They are still inside their predator safe run.  But they are right up at the top of the tree which is super close to the welded wire that covers their run.  A raccoon could probably reach through and nab one.

And not only do I not one to lose one to a raccoon.  I REALLY don't want a raccoon discovering that I have a run full of fat, tasty hens and to stalk it at night.

I have Solar Nite Eyes all around my run.  For those not familiar with these, they are small black boxes that charge up in the sun all day long and at night, there are two red lights that blink on the front of the box.  Predators think they are being watched by another predator when they see these blinking red lights and it can deter them.  And I believe that they work.

You can order them on Amazon.com if your local feed stores don't sell them.

Last night I trimmed the little one's wings to see if I could ground them, so to speak.  They are so small and nimble, that I'm not sure it will have any effect.  But I figure it can't hurt.

I tucked them back into their house after trimming their wings.  As our nights get colder, maybe they'll decide that sleeping all snuggled together inside their cozy little house isn't so bad after all.  And once it start to rain, sleeping in that tree is going to be, well, cold and wet and not at all desirable.

And tonight, they are all tucked into their little house all on their own.  Thank goodness.  I hated going out there after dark and trying to snag them out of the tree.  And they hated it too.  I was afraid the neighbors were going to think I was butchering chickens, the way they screamed.

So I'm very pleased with our progress.  It's a baby step.  But it's huge for me.

Sorry for not having photos.  I hate to take flash photos of them when they are sleeping.  I know I hate it.  And I've been tearing up my garden as we get ready to do some landscaping.  Which I SUPER excited about.  It will rock their world for a bit while they tear out our old, ugly cement patio.  But we're putting in some things that I think will make them very happy so stay tuned...

I don't get chickens

I really don't.  Just when I think I do, they do something that stops me dead in my tracks and makes scratch my head and go "what's up with that?".  Today, I witnessed one of those moments that I just don't get.  And if anyone out there does, please explain it to me.  Because none of the books cover things like this.

I typically only let the girls out for about an hour each afternoon, late in the day.  But today I had lots to do in the garden.  So I let them out mid-morning and they had a blast. They inspected every hole I dug and stepping stone I overturned.  They watched me prune back plants and gave me their bok bok of approval.  They had to have been just stuffed with happiness because I was digging up worms and bugs right and left which they eagerly gobbled up.

And then Honey Bear started to make that deep, guttural baawwk that told me she had an egg in her and would soon disappear off to her favorite nest to lay her egg.

One thing I find myself constantly doing with my girls, is counting heads.  I always make sure that every hen is accounted for when I go out in the morning and when I lock them back in their run in the afternoon.  I count heads if they are in the garden and I've had to go into the house for any length of time.  I only have the 7 so it's pretty quick and easy to do.

So after Honey disappeared, I found I was short TWO hens.  Poppy was missing.  I called for her but she's not one to answer like Coco.  I quickly found her two sisters but she wasn't with them.  My biggest concern with the Andalusians is that they are flyers and could EASILY get over my 8' fence.  Not that they have any desire to do so.  And I want to keep it that way.

So after quickly scanning the yard to no avail, I check the run and finally the Spice Cabinet and this is what I find: 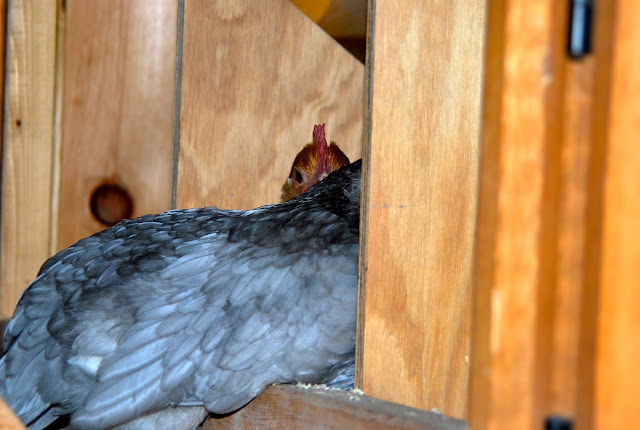 But clearly, some teenagers still need their mama and Poppy has a special bond with Honey Bear.  She stayed in there quite a while with her.  But not for the duration.  Her sisters began to call for her and she came out to go play with them.

Anyone else ever have a hen raise babies and a teenager who just wouldn't leave her side?

I got a white egg

But my Andalusians are only 10 weeks old.  There's no way it came from one of them.

We're having a little heat wave these past few days.  Which is common here in the fall.  We call it our Indian Summer.  But this one came on very suddenly and it's been super hot, close to 100 degrees.  And none of my girls like the heat.

I've been putting ice in their water and giving them cool fruit to eat.  I was worried about getting soft shelled eggs from giving them too many cool treats.  (It's happened before.)  But instead, I came home to this today.  A nearly white egg.

The egg was in Coco's nest and none of the other hens typically lays in Coco's nest.  She's my alpha hen and rules the roost.  She's also a Jersey Giant and being such a big girl, she is the only one that fits in that nest.  At least when she's in it.

It has some small spots on it and Coco is known to decorate her egg with spots.  So I'm pretty sure it's hers.  And I've read that the color is the very last layer that hens put on eggs before they lay them.  So I'm thinking that it was so hot that she just decided to lay the egg and skip the color today.  Odd to think that they can do that.  But it's amazing what their bodies will do as a survival instinct.

Tomorrow should be cooler.  Hopefully, we'll all get back to normal.  If I get more of these, I'll be sure to post photos.
Posted by Flock Mistress at 10/02/2012 5 comments: