I was so thrilled last night when everyone tucked themselves into their houses safely for the night and I had finally achieve peace and harmony.  I knew it wouldn't last forever but I was hoping for a few weeks.  I got 8 hours.

I go out this morning and everyone is up and about.  Always a good sign.  Honey Bear is at the feeder and Pumpkin (one of her ex-babies) comes up to eat next to her and she chased her off.  But it doesn't stop there.  She pecked her, pulls out a feather and eats it.  OMG!!!

I'm standing there in shock, disbelief and absolute horror at 6:45am in the morning.  What just happened?!?  My sweet Honey Bear never even pecked at my hand when she was broody.  She's never pecked at ANYTHING!  And she just pecked at one of her babies!

But I'm starting to understand this as normal pecking order.  I mean, they call it a pecking order for a reason.  But it is SOOOOO very difficult for me to watch.

I love my babies and I kill them with kindness each and every day.  I hold and hug the ones who want that affection.  I hand feed them treats.  I scoop up poop twice daily.  I buy carrots with the top on because I know they like to eat those.  You see where I'm going.

But no matter how you raise your hens, there has to be an alpha and then an order of dominance from her down to the one who is at the bottom of that order.  That's just how it is in the chicken world and I'm never going to change that.  They come hard wired that way.

So Coco is my alpha, and then Ginger.  They are the two oldest in the flock.  Spice commands the third spot and Honey Bear is behind her.  Those two being the second oldest members of the flock.  And obviously the three Andalusians are at the bottom of the pecking order.

But what's really interesting, is that those three always seemed to be on equal footing with one another.  I never saw any pecking or chest bumping between them.  Until this morning.  And now the three of them are chasing each other around the run chest bumping right and left.  Clearly, they understand that they are no longer mama's babies but members of the flock and had better figure out their order.

I still have three feeders and three waterers scattered around their run.  I don't want anyone to be bullied away from food or water.  And I will keep a close eye on everyone to make sure that they are not pecking to the point of drawing blood or pulling out so many feathers as to create a bald patch.  I'm fortunate to have a rather sizable run for my small flock with a small tree and LOTS of places to hide, perch, get up out of the fray, sunbath, take dust bathes, etc.  So I'm pretty sure this just normal pecking order clarification and that Honey Bear hasn't turned into a bully.

But I was so brokenhearted to witness that this morning. Especially, on the heals of my feel good post last night.
Posted by Flock Mistress at 9/28/2012 3 comments:

The baby chicks are babies no more.  They are two months old and fully feathered.  They are just as cute as can be too.  And Honey Bear is done raising them.

I knew this day would come.  I've read it can happen as early as 2 weeks and as late as 6 months, with 2 months being the most common point where mama is done being a mama.  The babies are able to fend for themselves.  They are fully feathered and able to stay warm at night.  And they know where to find food and water and who to stay away from.

I knew this was coming about 10 days ago when I offered Honey Bear meal worms and she gobbled them up all for herself.  She would normally call her babies over and share.  But nope.  She was no longer sharing.  She had lost quite a bit of weight and was even loosing feathers.  Probably more of a stress induced molt than a regular molt as she's not even a full year old yet.

And this past week she was squatting for me, a sure sign that she's ready to come back into lay.  And today there was a perfect, tiny egg in one of the nests.  I know she was a bit confused about where to lay.  I put two plastic Easter Eggs in all of the nests.  Even the outdoor nest that Spice uses.  I know this can encourage them to lay there as they see the eggs as a sign that it's a safe place to lay.

I just went out to check up on everyone after dark and Honey put herself to bed in the big hen house with the big girls.  The babies are all snuggled up together in their house.  So for a very brief moment in time, we have peace and harmony and I'm loving it.  Now I just have to wait patiently for my babies to lay me beautiful white eggs.

Okay, this post has NOTHING to do with chickens.  Well, almost nothing.

Today, the Space Shuttle Endeavor took its final flight over California before heading to Southern California where it will be on display at a museum.  And it was quite exciting to see.  I work in a building that is less than a mile from NASA Ames and Moffett Field so I was reasonably sure I'd get a good look as it flew over.

And sure enough, as it approached San Francisco, work in Silicon Valley came to a screaming halt as everyone headed outside to find a good viewing spot.  There were people lining the windows of my building and people on the roof.  People lined up on top of the parking garage and on top of the local hills and just about anywhere and everywhere to try and get a good view.

My husband even texted me that he got a pretty good view just standing in our driveway.

And as I watched the shuttle disappear south riding atop its mothership, it got me thinking... 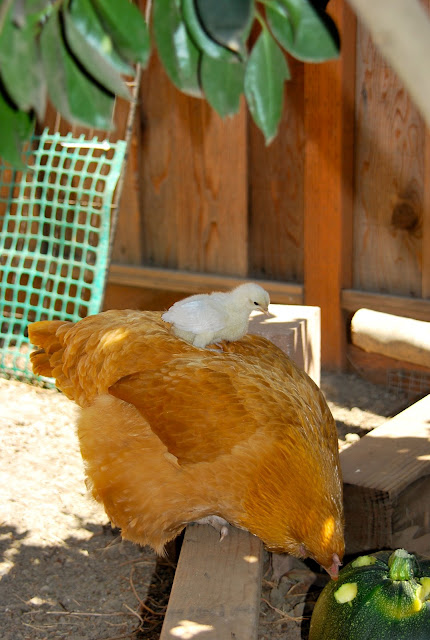 Maybe my little Sugar knows something about how to fly efficiently.  Just hop on top of a bigger bird and get a free lift to your next destination.

Today was definitely a "feel good" kind of day.  Didn't matter if you were Democratic or Republican, anti-this or pro-that.  Everyone was walking around with a smile on their face and it made me feel good.  We need more days like today.  And I'm guessing that today was just like any other day for my girls.  Wake up, eat breakfast and get a drink.  Get busy scratching and laying eggs.  Stop work for a dust bath and preen session with your sisters.  And line up at the gate for the afternoon release into the big garden.  And tomorrow, they will do it all over once again.
Posted by Flock Mistress at 9/21/2012 5 comments:

Okay, I'm a softie.  I admit it.  I felt awful putting the peeper on Spice and took it off three days later.  I've seen her go after Honey a few times.  But I'm not seeing any feather pulling.  And while Honey usually moves out of her way, then she'll stand right next to Spice and preen or today they took a nice, long dirt bath together. 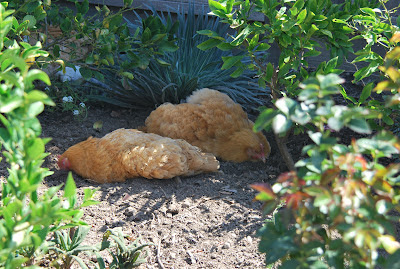 I'll spend some time out there this weekend.  I have a few projects to work on and hopefully, I can get some better photos and a better idea of whether or not they are getting along better.
Posted by Flock Mistress at 9/14/2012 2 comments:

I just don't understand why my spoiled hens can't just get along.  Spice has been a pill ever since Honey went broody.  It was only the week before that when we lost Sugar so looking at it from her perspective, she lost both her flock mates and I can see how that would be upsetting.

But she's been lashing out at Honey ever since and she's getting more vicious.  She's not drawing blood but she's ripping out feathers right and left.  And my big concern is that she'll teach this naughty behavior to Honey's babies.

I finally resorted to putting a pinless peeper on Spice.  Which I really hate to do.  They seem so cruel to me.  And yet, they do work.  And so many people swear by them.

But now this has given Ginger the confidence to peck at Spice.  And that's not right.  So what do I do?  Let nature take it's course and let them all work it out?  Or try and intervene?  I'm really torn.

If anyone has any advice for me, I'd love to hear from you.

The babies are 5 weeks old today and getting SOOOOO big!  Mama Bear (Honey) is still mothering them and comes when they call her.  She still gives them the best treats when she finds them.  And they are still sleeping under her at night.

But their head and neck feathers are coming in fast and furious and don't think it will be long before they will be comfortable roosting next to her instead of sleeping under her at night.  At least I hope.

Today was quite warm and I let them out into the big garden.  The sprinklers ran earlier so it was still quite damp and cool.  But where does Mama Bear show them where to hang out, right by the back sliding door where Flock Mistress comes and goes from and might bring treats. 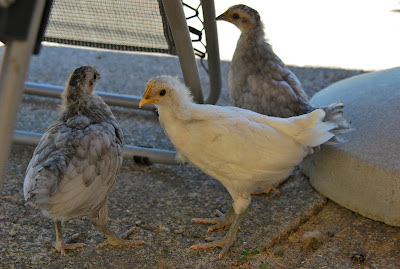 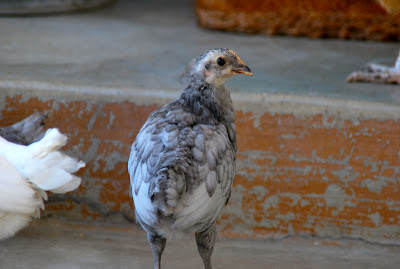 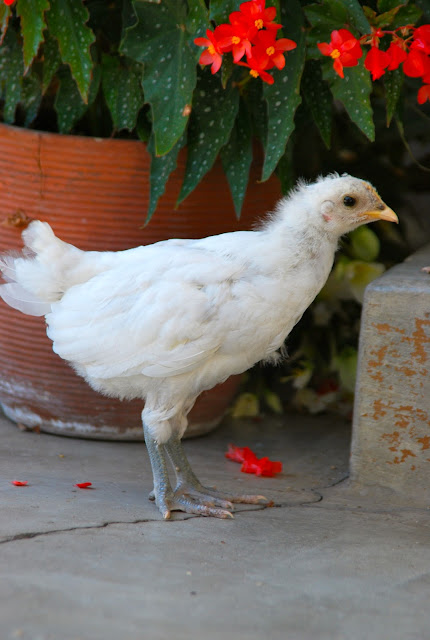 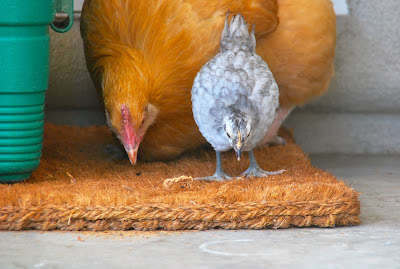 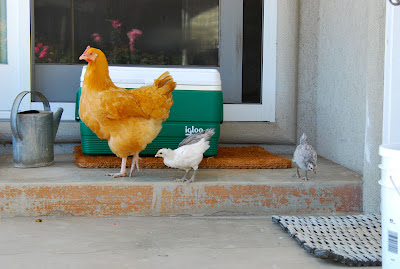 Just a little home movie of the girls, their run, the new hen house, etc.  I've just come from my morning swim and I've got my weekend grubby chore clothes on.  I'll have to be more fashionable for my next video shoot.

But gives you a good chance to see the girls in action and what goes on in their world.  Oh, and this is from last week.  Or maybe the week before.  Time gets away from me.  I'll try to get a more up to date one this weekend.  The babies are getting SOOOOO big!