Let me tell you about Ginger.  She's a beautiful Buff Orpington who will be three years old this fall.  She's your classic hatchery bird where they breed for quantity and not necessarily quality.  So she's a on the small size as BO's go and more blond that golden in color.  She wouldn't win any show awards but I love her and she's a five star in my eyes. 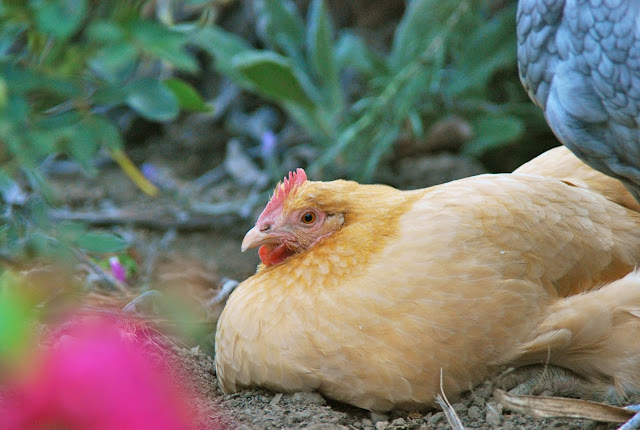 She had a rough up bringing.  She was one of the original four I purchased and I knew buying a mixed batch of birds might set her up to be bullied as BO's can be very sweet and docile.  And right from the beginning, she was destined to be the bottom of the pecking order.  She was the loudest and the most needy of the batch.  I always said she should have been raised by a mama hen and not in a brooder.  She hated being separated from the other chicks.

As the four grew up, it became apparent that Poppy was a rooster and had to go, and then there were three.  And something was never quite right about Pumpkin.  I was always suspicious that she didn't see as well as the other two.  But I was never able to confirm that.  Regardless, Pumpkin a bit more aggressive.  Coco was clearly the alpha so no one messed with her.  Meaning Pumpkin took out her aggressions on Ginger.

I thought I was doing a good job keeping things in check.  And I thought if they had lots of food and water and plenty of real estate, they'd have nothing to bully over.  But it's called a pecking order for a reason and while lack of food, water and confinement can cause bullying, sometimes birds are just bullies.  So when the hens turned one, I re homed Pumpkin.  And then there were two.

But the damage was done.  Ginger was this timid little hen.  She started to molt and molted hard.  I really thought I was going to lose her she was so miserable.  So I hand fed her scrambled eggs and pretty much anything I could get her to eat.

All of that has shaped who she is today.  She's a grumpy, moody little hen that won't take anything from any of the other hens.  And if she lived just about anywhere else, she would have been "Sunday Dinner" a long time ago as she starts to molt in June and stops laying eggs.  She won't finish molting till November and won't start laying again till March.  Or so she's done in the past.

Most people who are in the business of raising chickens for eggs can't afford to house and feed a chicken who's only going to lay three months out of the year.  Doesn't matter to me as I get plenty of eggs and she's part of the family.  So she's got a good gig going on here.

Today I came home and collected eggs and found this tiny brown egg.  It's BARELY in the medium category and darker than Honey Bear's brown eggs.

So with no camera in the coop, I can't be certain.  But I do believe that Ginger did indeed lay an egg today.  And I still can't believe it.  Strange things CAN happen.

Ginger has never gone broody.  Unusual for a BO.  Honey Bear goes broody every four weeks.  Which is sooooo frustrating so I suppose I should count my blessings.  But I told Ginger that if she ever went broody, that I'd get her some babies to raise.  I'll bet she'd be an awesome mama.
Posted by Flock Mistress at 8/25/2013 3 comments:


Spent the morning cleaning up the girls run.  I was a big fan of sand on the floor of the coop.  Makes it really easy to scoop up the droppings each morning and know the girls have a clean house for the day.  But the sand just gets nasty after a while so several times a year I remove all of it completely and replace.  But this time I opted to go back to shavings.

I've had my eye on a new and larger coop for the girls for a long while now.  A coop that allows me to install a poop board under their roost so that scraping out the bulk of the droppings every day or every other day is a snap.  And I'm finally ready to order it.

So then the question is, what to do with the old coop.  Honestly, I'm not positive we could get it out of the run thru the gate.  And I do still love it.  So I'm going to have the guys move it to the opposite side of the run and use it as a maternity ward.

Honey Bear seems to go broody every four weeks and I might just have to let her be a mama once again.  She was an excellent mama a year ago when she raised the three little ones.

Last weekend the hens got baths.  Have been putting oil on their feet to get rid of a light case of scaly leg mites and couldn't stand that their tummy feathers got dirty.  Here's Honey Bear in the tub.  She LOVES a bath.  If you watch to 1:40, you'll see her nibble uncontrollably on the sink, she's SUPER ticklish.  I promise to get a better video of this with her in my lap on the patio.  It's hysterical.