I brought some of the girls eggs to friends the other night and they commented on my egg label. 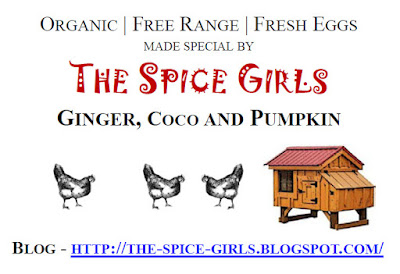 And it started a discussion about the different labels on egg cartons and what exactly they mean:
- Organic
- Cage Free
- Pastured Eggs / Free Range

Organic means that the chickens are fed an organic diet, must have access to the outdoors where they can spend time in the sun.  They must never spend time in cages.  And are never given antibiotics and never forced to molt.

I'm not sure how you would force a chicken to molt and honestly, I don't want to know.  The more I research chickens, the more I learn about the horrible things commercial chicken farmers do to chickens including leaving the lights on all day and night to force them to lay more eggs, de-beaking - a process where the ends of their beaks are removed which helps eliminate pecking, and packing them into cages so tight, they can't stretch their wings or rest their feet.

Cage Free means that the hens are not kept in cages.  Hens are allowed to freely walk around and will typically lay in nest boxes.  But this description can be very deceptive.  Because many cage free set ups look like this:

Cage Free doesn't mean the hens ever see the day of light.  Doesn't require that they get time to scratch in the dirt.  And as you can see, it could take some time to head over to the nest boxes only to find your favorite one occupied with a queue.  Many of these hens will just lay their eggs on the floor.

Pasture or Free Range Eggs are more along the lines of what we have going on for our Spice Girls.  They are never confined to a cage.  They have free access to be inside their hen house or outside as they choose.  They can freely eat bugs, greens and other tasty treats they unearth with their feet.  Or simply spend time digging up my bulbs if that's what they feel like doing.


So I've updated my labels with Organic, Free Range, Fresh Eggs to better reflect the conditions our hens live in.  I like the term Pasture Eggs but I'm afraid people are going to think my eggs are pasteurized.  And Free Range really does describe my girls living arrangements well.

And if you detect a tinge of bitterness towards the damage my girls are doing to my garden, you are spot on.  We're still trying to strike a balance.  Me, I want my bulbs to stay planted in the ground, my patio to remain a poop-free zone and for them to leave me a few herbs to use when I cook.  The girls,  like to dig up my bulbs for sport, poop where ever and when ever they get the urge and when they discover something tasty like parsley, eat it like the world could end at any moment.  Sigh...
Posted by Flock Mistress at 5/31/2011 1 comment:

"BAWK - Take me to your Leader"

It's not enough to have live chickens.  You have to hang framed drawings of chickens, have kitchenware with chickens on them, decorative chickens tucked into corners of the house and metal chickens decorating the garden.

The girls got a new addition to the garden today and came out to meet her.  It's got some sharp edges so I won't put it inside their run.  But they can come visit her in the main garden when I let them out for a bit in the evenings to visit. 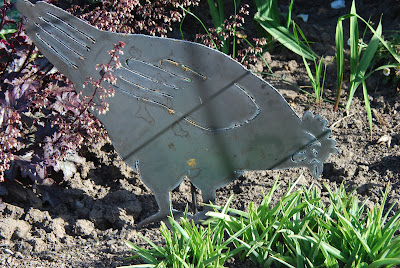 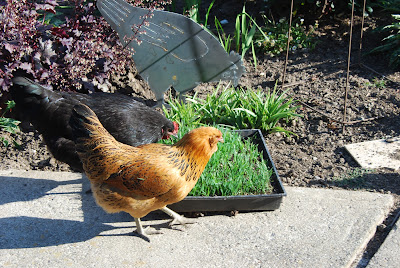 Eggs that come from hens allowed to free range on a pasture are by far, more nutritious than eggs from hens confined to small cages in factories.  According to the US Department of Agriculture, eggs from hens raised on pasture show 4 to 6 times as much vitamin D as typical supermarket eggs!

This has been proven time and time again and yet the commercial egg farmers in this country work tirelessly to have us believe otherwise.  I love this particular line that says: “Barring special diets, egg nutrients are most likely similar for egg-laying hens, no matter how they are raised.”  But isn't it all about the diet?

I mean, we all know, we are what we eat.  So how can you compare a hen that only has access to commercial feed to one that is allowed to hunt, scratch and dig for bugs, seeds and greens all day long.  And is out in the sunshine and fresh air and has room to roam and stretch its wings and legs.  And more importantly, isn't standing on a wire floor caked with excrement.

What really breaks my heart is that commercial egg farmers keep the lights on 24x7.  Chickens need a certain number of hours of daylight to produce eggs.  And if you live in a region where the winter nights are long, your hens will stop laying altogether until the days lengthen with the arrival of spring.  Some farmers will add supplemental light for a few hours a day to trick the chickens into thinking the days are longer and keep them laying year round.  But still giving them at least 8 hours or darkness so they can get their ZZZZZ's.

And when it all comes down to it, why do fresh eggs from hens that free range on a pasture all day taste SO much better than eggs from commercial factories?

You can read the full article here:
http://www.motherearthnews.com/Real-Food/2007-10-01/Tests-Reveal-Healthier-Eggs.aspx
Posted by Flock Mistress at 5/21/2011 No comments:

I don't understand why this one nest box is such a favorite.  Maybe it's the darkest?  Maybe it has just the right mix of pine needles and shavings to make it comfy?  Maybe it's the north-east most box and that's what they want.  What ever it is, it's the girls favorite and I frequently find all three eggs in that box at the end of the day.  And silly me, I just assumed that they nicely took turns laying their eggs in that nest box.  Well not today!

I was doing my usual weekend chores in their run today, turning the compost, scrubbing out their waterer and refilling, adding feed to the feeder, etc.  Coco had quietly excused herself to go sit in "the" nest box while the other girls followed me around.  All was right and peaceful.

Then Coco, remember, she's the Alpha Hen, had to come investigate what all was going on and make sure she wasn't missing out on any treats.  And I really thought she must have an egg in her cuz she was very bossy and loud.  Not to mention, had been siting in a nest box for some time.  Well, somewhere in the middle of turning the compost and asking Coco to keep it down, Pumpkin excused herself to go lay an egg in "the" nest box.  And that was fine, until Coco decided to return.

Pumpkin had set up shop in "the" nest box.  Coco squawked at Pumpkin and Pumpkin held her ground and growled back.  This went on and on and on for quite a while.  Finally, Coco, just bullied her way into the nest box with Pumpkin in it.  Well, there's barely enough room in the nest box for Coco alone.  Two birds in there was just too much.
You can check out a small video of the action here: http://www.youtube.com/watch?v=2jOZiSw76vU

After filming, I simply couldn't watch anymore.  So I left them alone to duke it out.  And squwak and growl they did for the next hour or so.

After lunch, I went to collect eggs.  And I'm not sure which surprized me more.  The fact that after ALL that noise, posturing, fighting over the favorite nest box, Coco never laid an egg OR the fact that Pumpkin had laid THIS!

An egg that's twice the size of her normal egg.  OUCH!!!  I've never checked out the back end of one of my hens till today.  I was really worried she might need attention back there.  But she was fine.  She sat in the nest box for quite a while.  Not sure if it just stuned her or she reallly needed time to recover from pushing that out.

I'll bet good money that there're two yokes in there.  And we'll find out tomorrow at breakfast.  Just in time for tomorrow's nest box squable.
Posted by Flock Mistress at 5/14/2011 No comments:

Well, stop the catalogs.  I took this on as my personal mission a few years back.  I was getting more catalogs than I could count.  And catalogs from companies I'd never heard of, let alone, ever ordered from.

And with access to the web, I find catalogs are simply not necessary as you can access the latest on the Internet.

So I signed up with Catalog Choice.  It took a while and in some cases, I had to call and/or email the actual catalog sender directly.  You can check them out at:
https://www.catalogchoice.org/?utm_source=cchoice_news&utm_medium=email&utm_content=email_logo&utm_campaign=340

One important thing to note: When you place an order, tell them NOT to add you to their mailing list.  Or the cycle will start up again.  We no longer get any catalogs at our home and I'm amazed at how much less paper we have to recycle.
Posted by Flock Mistress at 5/02/2011 1 comment: