As I stated in my previous post, I got the girls a bigger coop for their birthday this year.  This is the coop I should have bought in the first place.  I was naive when I started this and when I saw that the coop held 3-5 hens, I thought it meant it would hold 5 hens.  But what they really meant, was 3 full sized birds or 5 bantams.  So my cute little coop w/ the red roof was always a squeeze for them.

Being in California, they only went in to lay eggs and sleep.  I never put their food or water inside as it was never necessary.  And it has 3 nests which was nice.  So it kind of worked.

Where I ran into trouble was integrating new hens.  The girls want to sleep next to certain buddies.  And there was really only one arrangement that worked.  Now, would they go in and take their respective positions?  No!  They'd quibble and peck and argue at bedtime.  Which upset the new birds and also upset me.

I tried a few other cheaper coops but they just didn't work.  So I finally just ordered up the larger Amish built coop.  What kept me from doing this all along was the fact that I had to have it flat pack shipped and then assembled inside my run.  Because it wouldn't fit through my gate or into their run. 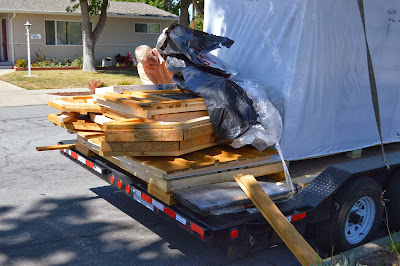 But as you can see, it really isn't a big deal having it arrive flat.  The guys unloaded the truck in no time and got to work assembling the coop in place. 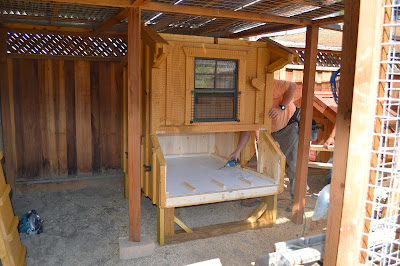 Here they have most of the coop assembled.  The nests and roof are still missing. 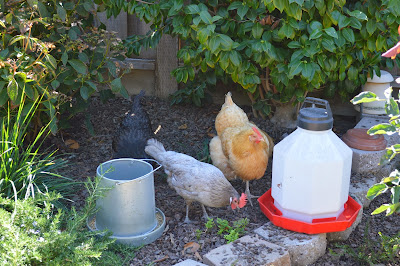 I didn't have any place to put the hens while their run was wide open.  And the guys kept going in and out the back gate.  I was worried about a dog coming in and the hens getting out so I hung out with them in their favorite corner of the garden. 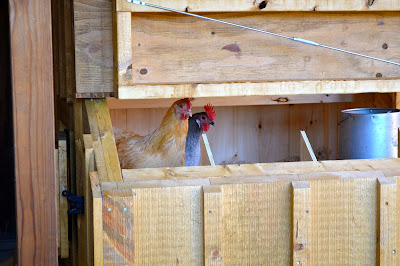 Here the guys have JUST finished and I let the girls back into the run.  Honey and Poppy are by far my most curious hens and were first to hop up inside for a closer look. 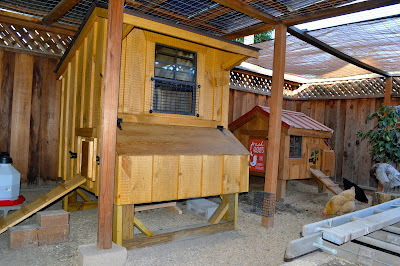 New coop on the left and the old coop on the right.  I couldn't bring myself to part with the old coop.  It's just so cute with that red roof.  I thought I'd use it as a maternity ward when the time comes.  Turns out that Honey likes laying her eggs in there so I leave it open for them. 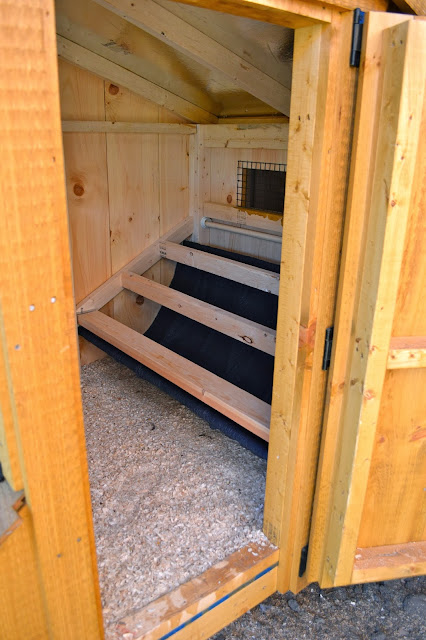 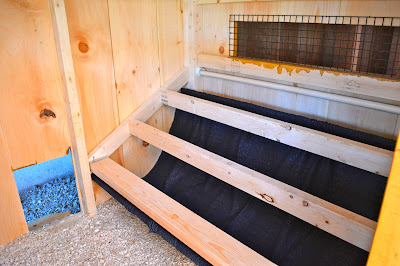 Here's the inside of the new coop.  I added a third roost mostly to make it easier for the hens to step up to roost at night.  I also installed some dowels and created a sort of "poop hammock" to catch their droppings.  The concept is great.  But one morning I could hear Honey calling.  She only calls when there's a problem.  And when I went outside, she had slipped between the two roost bars and was standing in the hammock with no way to get out.  So that was the end of the hammock.

I'm now trying the deep litter method.  Where you keep adding more pine shavings and leaves and mixing up the droppings and they sort of compost inside the coop.  It sounds disgusting.  But people have been doing it for many, many years very successfully.  And the decomposition process can keep the coop a few degrees warmer in winter.  It sure is easy.  And will be nice to have the droppings all ready to go into the garden come spring.  We'll see.  I promise to blog more about the deep litter method  once I have more data.

First off, I do apologize for not blogging more.  I think just about everyone will understand that life gets in the way sometimes and while it's not a good excuse, it's the only excuse I have.

October was a big month.  Coco and Ginger turned three years old.  I can't believe it's been three years already since I got my cute little balls of fluff.  That means that Honey Bear is nearly two years old and Poppy turned one in August.

To celebrate, the ladies got a new coop. 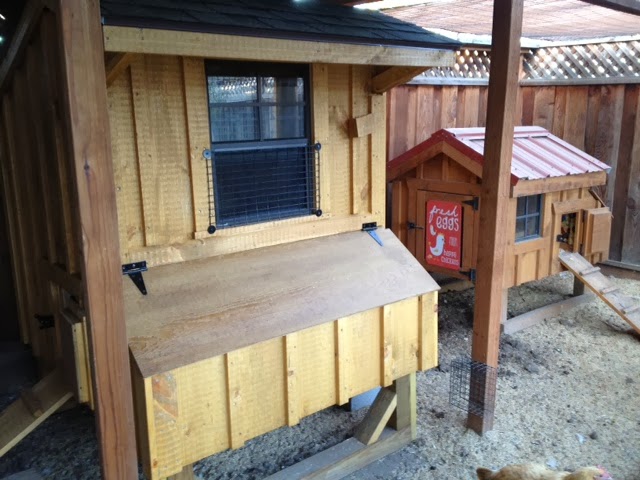 It's really just the next size up from their previous coop but somehow it seems SOOOO much larger.  There are two four foot long roosts and four cozy nest boxes.  And as there is so much more space under the roosts, I've switched over to the deep litter method.  So instead of cleaning out the coop weekly or monthly, I'll keep adding leaves, pine shavings, etc. under the roosts and stirring up the mix until spring time when it will all go into the garden.  Stay tuned for a blog on how that goes.

On a happy note, I decided to participate in my vet's office Halloween contest this year.  Dressing up Ginger as a Bucket of Chicken.  And she WON for most creative costume!  I have no idea how I'll top that next year but I have eleven months to come up with something. 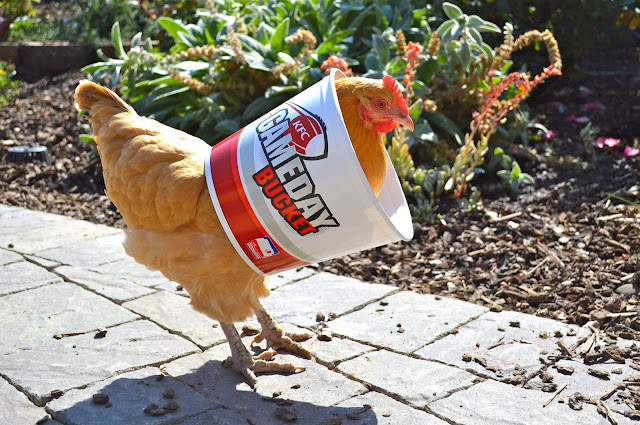 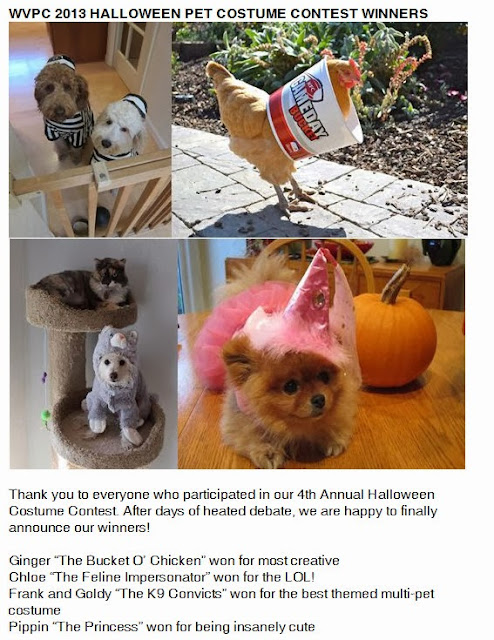 And on a very sad note, we had the vet put Ginger down last Friday.  She has something wrong with her.  That I knew months ago.  Xrays showed a mass inside of her and blood work indicated some sort of tumor or cancer.  She was clearly slowing down throughout the fall but was still eating and drinking so we let her be.  But when I came home from work on Friday, the other hens were cuddled up around her.  And would not leave her side even when I opened up the gate for them to come out.  That is not normal.  Usually they rush to come out once I open the gate.  When I went in, the big hens stood up and when Ginger tried to stand up, she toppled over.  And I knew that it was time.

I will always have a soft spot in my heart for Ginger.  She could be an enormous pain in the "you-know-what".  But she taught me so much about chickens.  My only regret is that she never got to be a mama hen.  She did play the role of auntie to the three Andalusians.  And my gut told me that if I bought home babies, that she would mother them with out going broody.  But it was never a good time for me to chance that knowing in the back of my mind that if she rejected them, I'd have to raise them.

And I did give away Lulu and Sprinkles about two months ago.  They were always on the wild side and I think they sensed that Ginger was not well and were challenging her for her number two position in the pecking order.  And like I said above, I have a very soft spot in my heart for Ginger.  So I found someone who lives on acreage with other hens and a rooster which I think is just what those two wild childs needed.  Last I heard, they were integrating just fine.