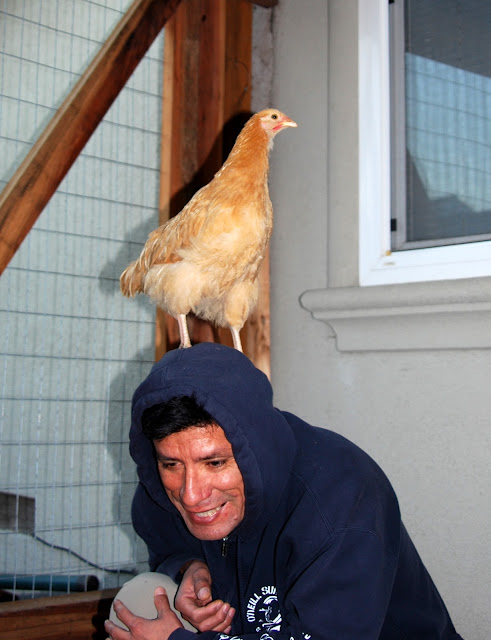 Ginger is just the sweetest chicken I could imagine.  We call her our Love Bug because she's borderline affectionate.  She will grab a few treats and then loves to hop up on my shoulder to watch her sisters eat.  And I usually tickle her tummy and sneak her a few extra treats.

Tonight, she hopped up on my husband and didn't stop at his shoulder but continued all the way up to the top of his head.  I think the fact that he had his hoodie up probably made it seem like just another level to climb.

I just thought that was too funny not to photograph.  She eventually flew down and went to forage with her sisters before heading off to bed.  They are now on the same cycle as the sun and usually head off to bed just after 5pm when the sun goes down.  Which means I don't get to see them during the work week as they are still asleep when I leave for work and tucked into their coop when I get home in the evening.

They also experienced their first California earthquake today.  Just a 4.1 magnitude which to us locals isn't much more than a foot massage.  I wasn't home to witness their reaction.  But I do remember being a child in California with chickens and being outside when the chickens began to act very strange.  I thought they were hungry so I went to the kitchen to grab them a treat and the next thing I remember was being grabbed by the scruff of my neck and practically drug outside by my mother as a rather sizable shaker rolled through.
Posted by Flock Mistress at 1/07/2011