I didn't get any eggs today.  :-(  It doesn't happen very often, but it has happened before.

I can't say that I'm surprised.  It's been super warm this week, mid-90's here since last weekend.  And after a very mild summer, I can imagine that this has stressed the hens.

Fortunately, I've had a flexible schedule this week and could give them some cool treats in the afternoon and hose down their run to cool them down.  I also think that my presence here in the afternoon is confusing to them.  They all line up at the gate wanting to be let out into the larger garden to free range.  But when I let them out, they hit their favorite spots quickly and then go stand in a cool, dark corner.

The fog layer is building up off the coast and should start to push in, so cooler weather is not far behind and hopefully, the eggs will follow.

I'm fortunate in that my girls are not quite a year old yet.  This means they won't molt this year.  Molting is the process where chickens replace all of their feathers with new ones.  It's a stressful process for them and requires lots of protein to produce all those new feathers.  And as a result, they stop laying eggs during that process.  Once they finish their molt, it's usually winter time where the days are shorter and many hens simply don't start back up until spring time.

But my girls should continue to lay through the fall and winter this year.  And my goal is to add a new chick next year meaning, I'll have one hen laying through the fall while the others, molt.

But today, I miss my beautiful egg presents that my girls usually leave for me each day.
Posted by Flock Mistress at 9/22/2011 4 comments:

http://www.youtube.com/watch?v=Tq3TOlWwUsI
Here's a cute little movie I shot of DH trying to eat his banana and Coco explaining to him that she loves banana and would really prefer that he share it with her.
Enjoy!
Posted by Flock Mistress at 9/19/2011 4 comments:

Also known as a June Bug, they are really quite pretty.  They look like giant emeralds and glisten in the sun with this iridescent shimmer.  And lately, some of the droppings in The Spice Girls run have had bits of iridescent shimmering green bits in them.


So I've had my suspicion that they were eating these things but I just couldn't believe it.  But it's TRUE!

My husband took the girls some spinach the other day and was holding it for them while they nibbled at it.  When all of the sudden there was this loud buzzing sound and what looked like a giant humming bird buzzed into the girls run.

Coco suddenly lost all interest in spinach and ran over to where the beetle had landed.  She grabbed it in her beak and it got away.  She grabbed it again and again it got away.  This happened several more times before she got a good hold on it and wrestled it to the ground and took her prize off into the corner where she could choke it down on her terms.

You can't watch something like that and not think of the movie Jurassic Park and realize how close chickens are to their cousins, the dinosaur.  My girls are so sweet and gentle but watching Coco deliberately and viciously go after her pray just makes me glad that they are as small as they are.
Posted by Flock Mistress at 9/13/2011 2 comments:

My sweet little Ginger has become a bad girl.  I fully expect to come home one of these days and find her with a tattoo on her arm, her wattles pierced, drinking whisky strait from the bottle and smoking.  I don't know where I went wrong with her.

Ginger has always been the baby of the group.  Even though she's the same age as the others.  She always has to sleep right in the middle of the group.  She HATES being alone.  She'll squawk incessantly when both her sisters are laying eggs and she's left alone in her run.  And she's a mama's girl.  She's always the first one to run up to me and jump up in my lap and inspect me for treats.

And unfortunately, she is also at the bottom of the pecking order of the three.  I don't have a big problem with pecking but it's taken some experimenting to figure out how and when to doll out treats so that they don't peck at her and drive her away.

And on more than one occasion when she's been bullied away from treats, I've let her follow me into the garage and help herself to a few meal worms strait from the farm.  Yes, I know what you are all thinking, I've taught her this naughty behavior.  And sadly, I must agree.

So this morning, I let the three out for just a few minutes of free range time while I cut fresh flowers for the house.  So I was back and forth in the garden.  And then decided to give their run a dusting of DE.  I've yet to find a mite on any of the three but it's something I fear and dread so I give their house and run a good dusting once a month or so.

I went back into the garage to put the DE away and just as I was exiting, I heard a sound.  I stopped and thought that was odd.  And when I turned around, I saw it.  Ginger's fluffy blond butt sticking up out of the meal worm farm.  OMG.  I ran over and scooped her up out of the farm.  Mind you, this is the next batch of worms I'm starting so I don't pull any worms out of this tub to feed them.  (And yes, I need to get a lid for this second farm.  It's on my To-Do list.  And just moved up several spaces.)

Anyway,  she's stuffed to the gills.  She had to have been up there for at least five minutes and probably closer to ten.  She was fat and happy and quite proud of herself.  I sat down on the back stoop with her and we had a long chat about her naughty behavior and what a bad girl she was.  And what does she do, she croons out her long neck and wraps it around mind and lets out a few soft peep peep peeps.

And yes, I melted.  How can one be angry at that?

But the next batch of meal worms is definitely going to be smaller than I had planned due to today's naughty activities.  Sigh...
Posted by Flock Mistress at 9/11/2011 2 comments:

Is it just me?

Or do chickens fluffy backsides remind you of old fashioned tennis panties.

Let me start with the fact that I cannot believe I'm blogging about how cute a butt is.  But since my girls spend most of their time with their heads down and their fluffy butts up in the air as they forage for tasty treats, I find I spend more time looking at their fluffy butts than any other part of them.

But you have to admit, they are quite proper in that their backsides are completely covered up with fluffy soft down feathers.

But back to my original question.  Do their fluffy backsides remind you of old fashioned tennis panties? 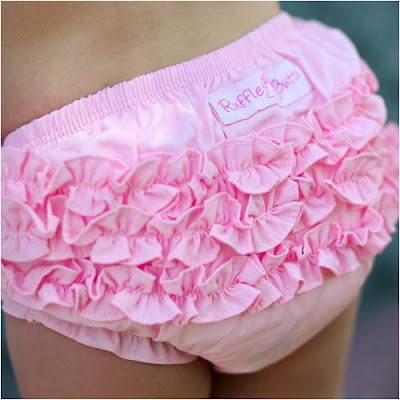 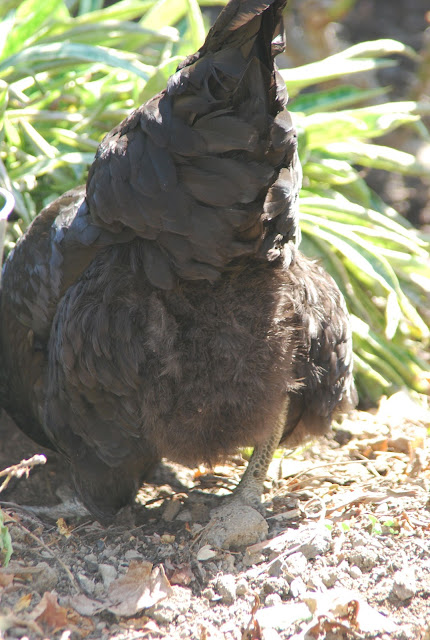 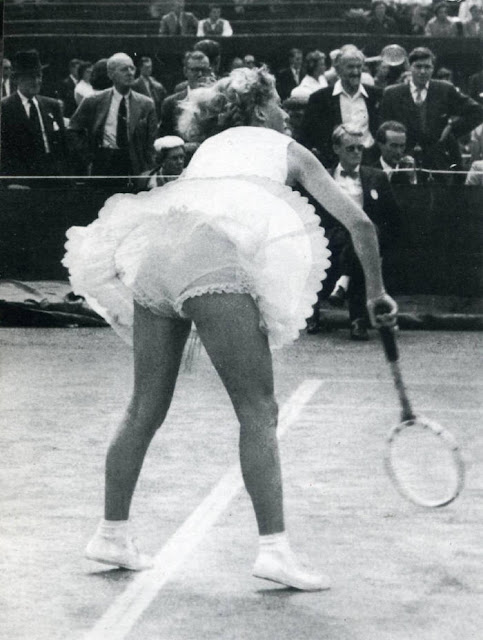 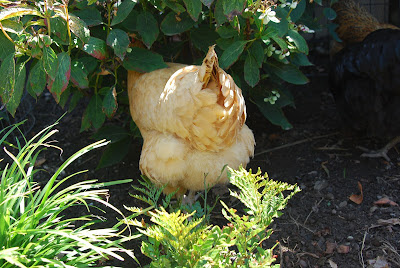 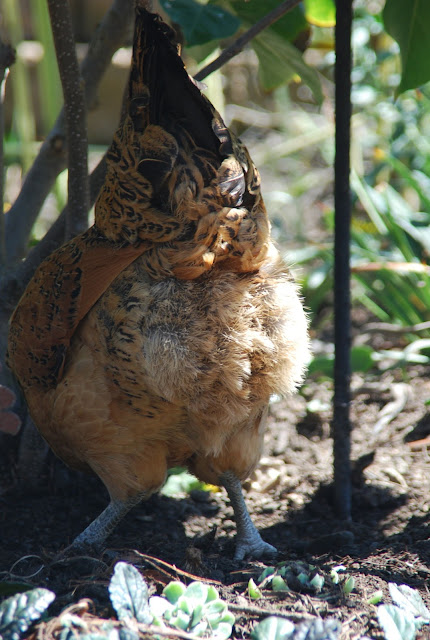 My chickens are NOT spoiled

My husband tells me all the time how spoiled my chickens are.  I do not deny the fact that they live quite well.  It's my way of righting some of the injustices that chickens have suffered and continue to suffer today; living in tight quarters, never seeing the light of day or getting a chance to scratch in the dirt.

This morning I mashed up a ripe banana and mixed it in with some powered feed and water and took it out to my girls as a treat.  Coco, LOVES bananas and will gladly eat a whole one all by herself if given the chance.  Mixing it with some mash insures she's getting some protein and calcium along with her banana treat.  And her sisters also have a fighting chance of getting some treat too.

Anyway, last night we were watching The Millionaire Matchmaker and Patti takes one of her clients to meet Tori Spelling to see that there are women out there who have careers AND still have time to bake, run a house AND raise chickens.

Check out the video clip.  Her silky Coco lives in her kitchen and gladly helps herself to a fresh baked scone right off the table.

So suddenly my very spoiled chickens, don't seem quite as spoiled anymore.  Shhhhhh, don't tell them this.