The girls are seven weeks old now and pretty much feathered out.  They still have small tuffs of chick fuzz sticking out here and there.  Saturday was their first full day outside in their run.  It was overcast all day, but still pretty mild, in the low 60's.

It's so fun to watch their new world through their eyes.  They are easily spooked by the wild birds that fly over.  But they got a good chance to exercise their wings and they love to chase each other around.  Coco spent some time inspecting the trail of ants moving along the fence but wasn't quite ready to peck at one.

I put some feed in the big feeder and water in the big three gallon waterer and they had no trouble making the transition to using those.  I'm just amazed how quickly the four of them can drain their little chick feeder and waterer.

We brought them back into the garage last night but I did not turn on their heat lamp.  So it was another first, being their first night without added heat and in total darkness.  I don't think it phased them but I worried all night long.

When I went out this morning, the garage was still dark and when I turned on the light, I clearly woke each of them up from their slumber.  But they quickly shook it off and lined up at the edge of the brooder, ready to go back outside.  So outside we went for day two outside all day.

I think we'll do this for a few more nights and then they will be ready to stay outside and sleep in The Spice Cabinet.

Here's Ginger standing in the door of The Spice Cabinet. 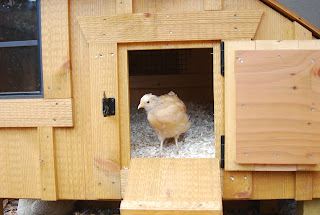