I always said I'm a creature of habit.  If I don't park my car in the same place at work, I come out of the building at the end of the day and stand there dumbfounded as to where my car might be.  Many occasion, I've thought that my car was stolen before I remembered a mid-morning doctor appointment or some other event which caused me to park elsewhere.

Well, I think this is why I love chickens as much as I do.  They are serious creatures of habit.  Move anything big around in their run and it rocks their world.  Try to feed them something new and they stand there and stare at it for minutes before one ventures a taste.

The one thing that I find particularly interesting, is that they sleep in the exact same order each and ever night.  Poppy is on the end, then Coco, Pumpkin and finally Ginger.  I know this because I go out each night around 8pm to wish them goodnight and every night, they are in that order.

My husband didn't believe me when I told him this last night as we drove home from a late dinner so we went out to say good night together and sure enough, they were in that order.  Until they decided it was unusual for both of us to come say goodnight and hopped down from their roosting bar to see if we had brought treats. 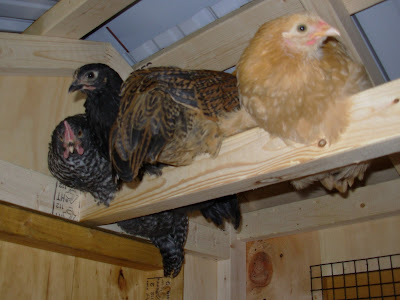