Apple on a Stick

﻿I know they are chickens and for thousands of years have been eating off the ground.  But I still have issues with it.  I mean, if they find a bug and eat it, okay.  That's fair game.  But to deliberately go out to their run and throw their food on the ground just seems wrong to me.  So I've come up with a number of ways to keep their treats off the ground like their dog bowl and basket cage. 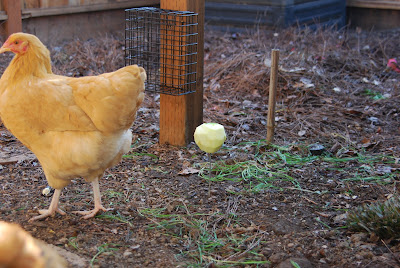 But apples were a challenge.  And they liked it best when I sat there and held it for them.  Well, I don't have that kind of time during the week.  So I was thinking of ways to present it when I remember I had this metal spike out in the garden.  I have no idea what it was intended to be at one time.  And I've almost tossed it out on a number of occasions only to say, no, there has to be a use for this thing. 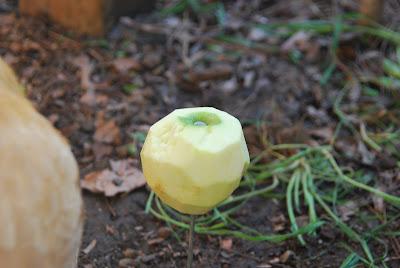 Well, voila!  It's the girls new apple holder. Of course, being something new and different, it took some discussion and time for them to get used to the idea of their apple just out there, right at pecking level. 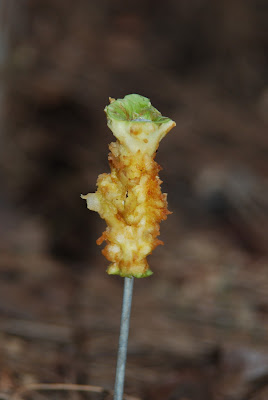 So I left them alone to discuss this and when I came back this evening, there was nothing left but the core.
I showed my husband who thought it was great.  And as he turned to leave, stepped on it and bent it in half.  Sigh.  Back to the drawing board again.
Posted by Flock Mistress at 3/05/2011