I can safely say, no one is happy right now

I knew today would be a big day and I had been both looking forward to it and dreading it at the same time.  Today, I moved the babies who are 6 1/2 weeks old of the garage and into the big girls run.

I let the big girls out into the garden which is something they love.  So I knew they'd be distracted for quite some time.  I broke down the fencing of the brooder and moved everything into the outside run and set it all back up.  I then brought the babies out to the run and turned them loose. This was their first time with this much freedom and their first time in the dirt so they were having a blast.  And I was enjoying the moment of peace and harmony while everyone was happy. 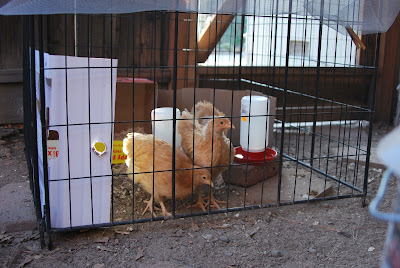 And then it happened.  Coco realized that the gate to their run was closed.  I never lock them out of their run.  And she started to scream.  Which got Ginger's attention and the two of them came up to the closed gate and saw the baby chicks in their run and went ballistic.  I've never heard those two make so much noise.  I was frankly, horrified.  So I ushered the babies into their brooder pen and opened the big gate so the girls come come back in.

But that did nothing to quiet them down.  They were not at all happy about their new guests and the modifications to THEIR run.

Okay, good.  Got that out of the way.

Well, all 5 of them whined and cried and whined for what seemed like hours.  I stayed close by to make sure that nothing crazy went wrong.  But I could clearly see from Coco's posture that given half a chance, she'd kill each and every one of those intruders.  ACK!!!


But I'm glad I did it.  It was time to get the babies out of the garage and sooner or later, they were all going to have to get to know one another.

I'll bring the babies back into the garage for another week or two as the temperatures have been dipping into the low 30's at night.  The garage stays around 50.  And then we'll see about having them actually spend the night in their brooder outside.

It's going to be weeks before I let the 5 of them co-mingle.  The babies need to at least double if not triple in size up to about 3 lbs before I'll even consider letting them all get together.