How do you isolate?

Boy, will I think twice about raising chicks again in the future.  They are adorable and loads of fun but it is a process.  Especially, if you are going to integrate them with an existing flock.  And it's tough for us small back yard flock owners who just have a few chickens as we don't typically have extra pens or space to isolate birds.

I have my 3 seven-week old BO chicks in a make shift brooder pen out inside the big girls run.  But I have no way to seal them off safely at night.  And I'm worried about rats or mice getting to them.  It's not typically a huge problem and I don't think I have a full on infestation.  But I do trap a rat once or twice a month so I know they are out there.  And I'd be beside myself if I lost a chick this far along in the process to a rodent.

So for now, I'll be bringing the chicks into the garage at night to sleep in the dog crate.  It's a bit warmer in the garage.  And more importantly, it's safe in the garage.

The problem with that arrangement, it that it's lots of work on my part to collect them at the end of the day and then put them back out in the morning.  And it get's Coco all riled up when I bring them back out.  I think she would do better if they were just out there in the morning when she gets up.

I have to say, I'm REALLY worried about her ability to accept them.  We'll cross that bridge when we get there.  But I'm seeing signs that tell me I should be worried.

So I bought a mini chicken hutch over the weekend.  It's super small.  But just big enough to house the chicks while they grow up into hens.  And I should be able to lock them inside that little nesting area at night to keep them out of cold drafts and safe from rodents.  The whole hutch will sit inside my predator proof run.  I've read reviews that say the latches on it are sub-par and that just won't be an issue since the chickens can't get it open. 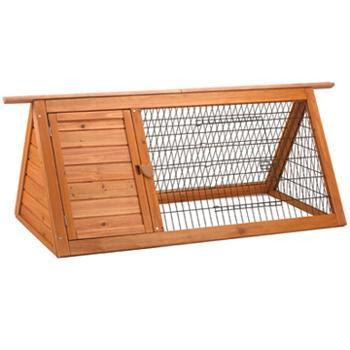 And it might just come in handy if I need to remove Coco from the picture for a week or two after introducing the chicks.  If she decides to go after them.  I'll remove her and try to re-set my pecking order.  And I'm sure it will come in handy in case I need to isolate sick chicks in the future.
Unfortunately, some assembly is required.  Not my strong point.  But hopefully by next weekend, I'm posting pictures of this hutch with three 8-week old happy Buff Orpington chicks lined up inside.
It is under $100 so the price was right.  And we've talked about getting a bunny so I suppose that would be just the perfect house for a bunny should we go that route.  Anyway, if you are the keeper of a small flock.  This little hutch is worth considering.
Posted by Flock Mistress at 1/16/2012