The Babies are 8 Weeks Old

Whew!  I finally feel like we're making some progress.  I will NEVER brood chicks in December and January again.  NEVER, NEVER, NEVER!!!  What was I thinking?
Well, I know what I was thinking.  Coco was bullying Ginger to no end and I was really afraid I was going to lose her.  I knew if I picked up chicks in December, that I'd be ready to integrate them with Ginger and Coco in mid-February.  The alternative would have been to pick up chicks in February.  And then I wouldn't be able to mix up my flock dynamic until close to June.
But I've been a wreck worrying about these little guys these past two months.  Are they warm enough?  What if the power goes out?  What if the heat lamp bulb blows?  UGH!!!
They are finally outside and not quite ready to live with the big girls full time.  And they were just crammed in this 3' by 3' pen.  So I picked up two more fence panels today from the hardware store which doubled the size of their pen.  And they do seem much happier.

The big girls also got a BIG bag of leaves from a neighbor.  I put it out there in one big pile and sprinkled some sunflower seeds on top and an hour later, you can hardly tell this was once a pile.  The leaves work great inside my run.  It gives them something to scratch at all day.  I toss out a few seeds each morning so I know there's something interesting in there.  And when they have destroyed most of the leaves, into the compost bin they go. 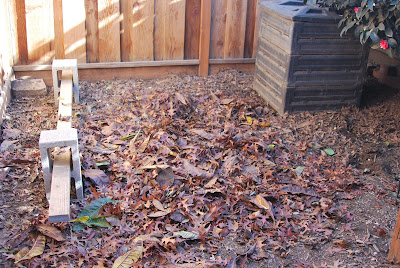 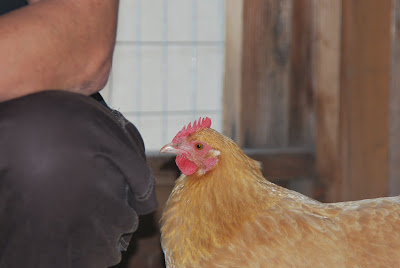 Spring is in the air.  The bulbs are all pushing up out of the ground.  And some of the flowering trees are starting to open.  They days are nice and warm and getting longer.  Both Ginger and Coco are once again squatting for me so I'm very hopeful that eggs are not too far behind.
I think I'll give the babies another two weeks before I really work and integrating them.  They know enough to stay away from the big girls.  And I don't get the sense that the big girls would kill them at this point.  But I'm not going to chance that.
I do think that Ginger is going to be more of a pain than Coco when it comes to getting everyone to get along.  I'm not sure if that's because Ginger has been at the bottom of the pecking order her whole life and is not going to take it anymore?  Or if she doesn't like the fact that these new kids look just like her.
Who knows what goes through those birds brains.  I've long since given up trying to figure it out.
Posted by Flock Mistress at 1/28/2012