Chickens are the best medicine

Anyone who doesn't laugh at their chickens every day, well, they simply don't have a sense of humor!

My birds crack me up every day.  I'm always laughing out loud at the goofy stuff they do and wondering what on earth must have been going through their little brain.

Last night I went out to check up on the babies who only learned how to roost last week.  My Black Cochin Penny doesn't want to roost.  I don't know if there's something wrong or if she's just a late bloomer.  You really can't see her but if you look through the legs of the Buff Orpington who's standing up, you can see black and that's Penny.

But what really had me laughing out loud, was how Belle managed to get her self up on the roost but tucked neatly behind the nest box curtain.  I love the look on the BO's faces.  It's like they are asking each other, What's she doing?  Is that how it's supposed to be done?

I scooted back into the house to grab my camera and fortunately she was still in the same spot when I came back outside. 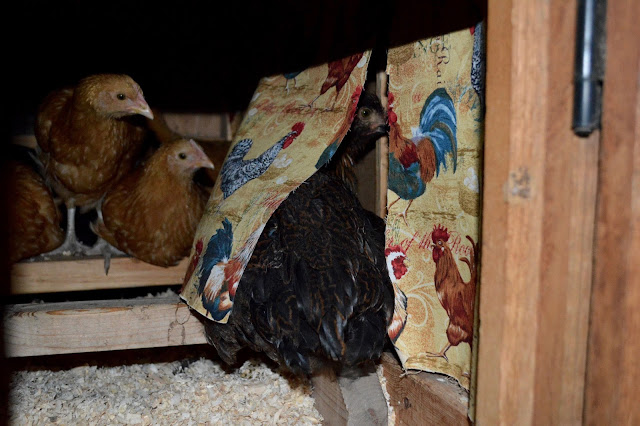 I reached into the coop and scooped up Penny and put her up on the roost next to Bella.  But I don't see any droppings under the roost this morning so I suspect she got right down and tucked herself back into the corner of the coop behind the BO's after I left.

Anyone else have a bird that refused to roost?  Did they eventually learn to roost?  I supposed it's not the end of the world if she chooses to sleep on the floor of the coop provided I keep her out of the nests.
Posted by Flock Mistress at 7/04/2016