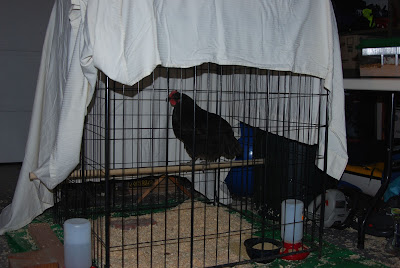 I separated Coco from Ginger tonight.  She was bullying her.  I realize this is instinctive and to a degree, is simply normal chicken behavior.  But it's tough when you only have two hens and all Coco's aggressions are directed at Ginger.  While she wasn't drawing blood, she was preventing her from eating.  Which is not good.

Ginger has lost more than a pound over the last month while she's molting.  And being bullied away from treats and food is not helping.  I need Ginger to get her strength back.  The final straw was watching them go to bed. Ginger would hop up on the roosting bar and Coco would hop up and peck her off.  She did it three times and I knew I had to do something.  Ginger seemed so frightened.

So I set up their brooder pen in the garage for Coco.  They say you can separate a bully for about a week and that when you put her back with the flock, she'll be at the bottom of the pecking order.  I don't know if that will work with just two hens, but I had to try something.  And anything I try, is going to require some sort of separation.

Ginger already seems so much happier without Coco.  I hand fed her some worms before tucking her in for the night.

Coco on the other hand is not at all happy about this situation.  And she's half asleep.  I'm not quite sure what to expect tomorrow morning.  I'm afraid that Coco could hurt herself if she decides to really thrash around inside the cage.

But maybe, just maybe, penning up Coco and only giving her feed and water, while Ginger has full use of the house and run and treats all to herself, will build up just enough something in her to give Coco a swift peck back if she gets in her space.  That's all I need is for Ginger to stand up for herself.

Say a prayer for me, this is harder on me than it is for either of them.  We'll try this for a day or two if I can stand it that long, and then try introducing Coco back with Ginger and see what happens.
Posted by Flock Mistress at 11/30/2011